Get Started
You have permission to edit this article.
Edit
Welcome, Guest
Home
e-Edition
News
Sports
Opinion
Features
Obituaries
Weather
Share This
1 of 5 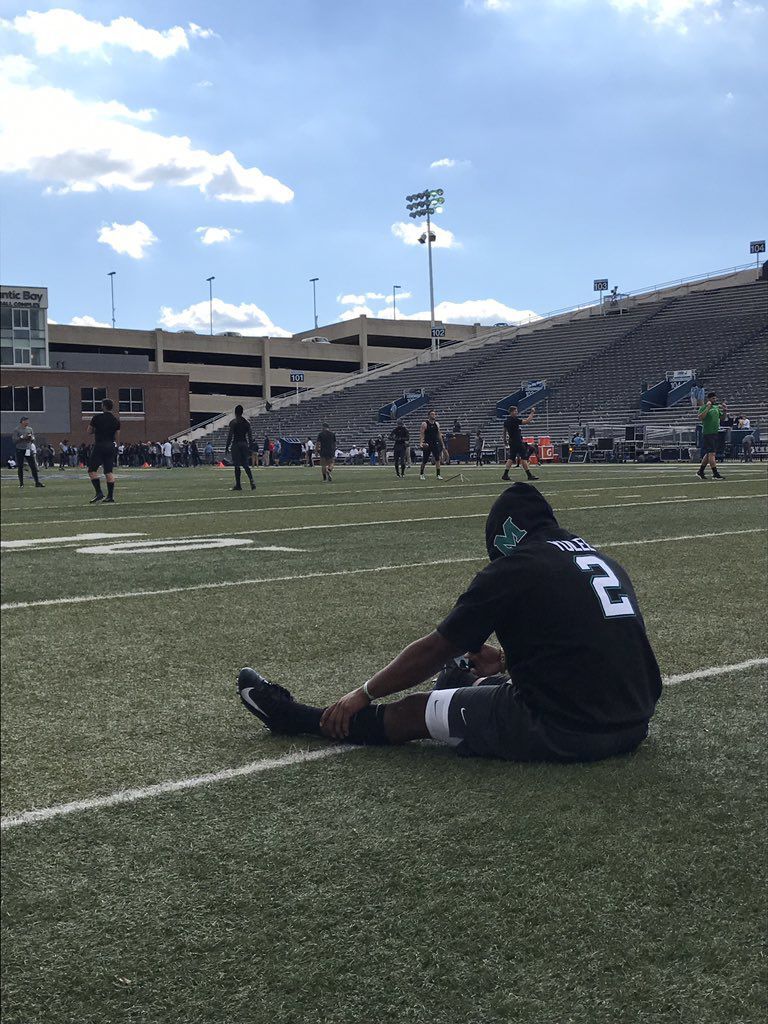 Marshall linebacker Jaquan Yulee sits on the turf at Foreman Field following the start of the Herd’s 2018 contest against Old Dominion in Norfolk, Va. This game was a homecoming for Yulee, who grew up just miles from the venue, while starring at Indian River High School in Chesapeake, Va. Yulee passed away at the age of 24 on Tuesday evening following a car crash in Suffolk, Va. 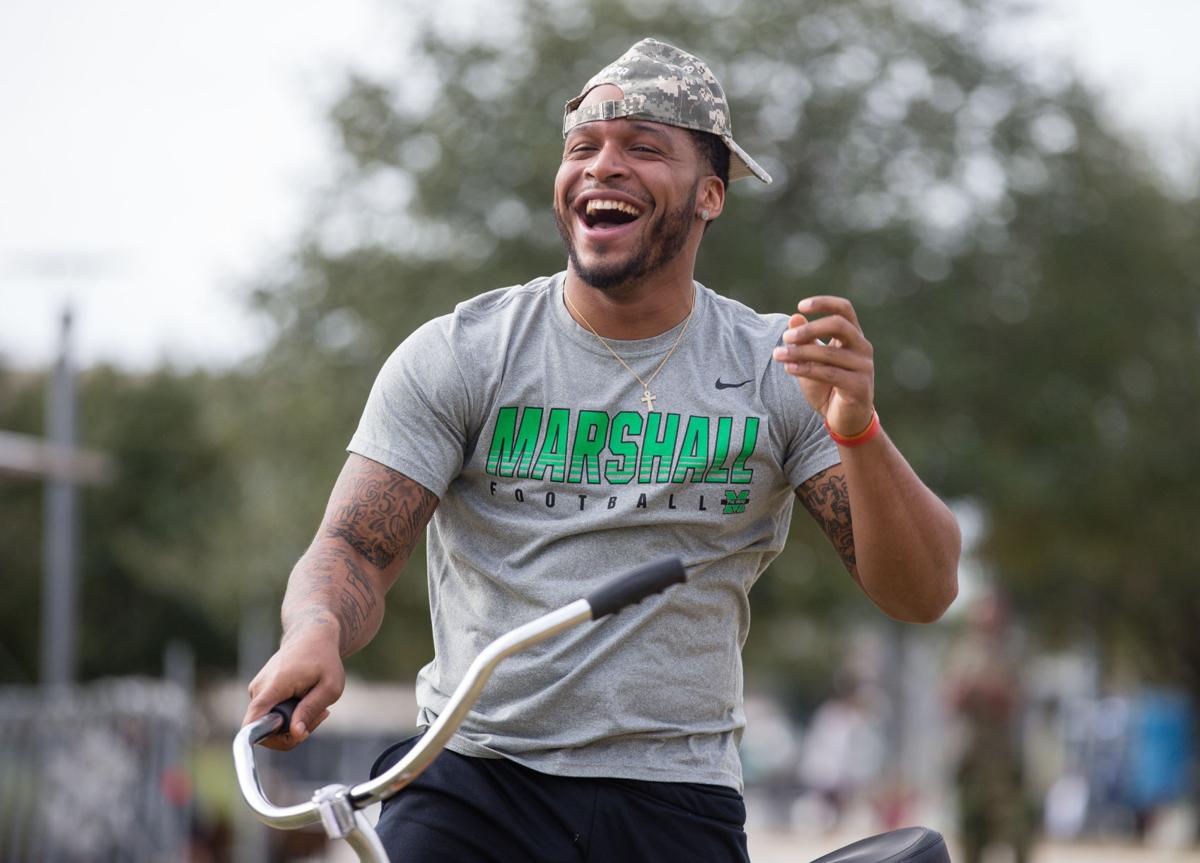 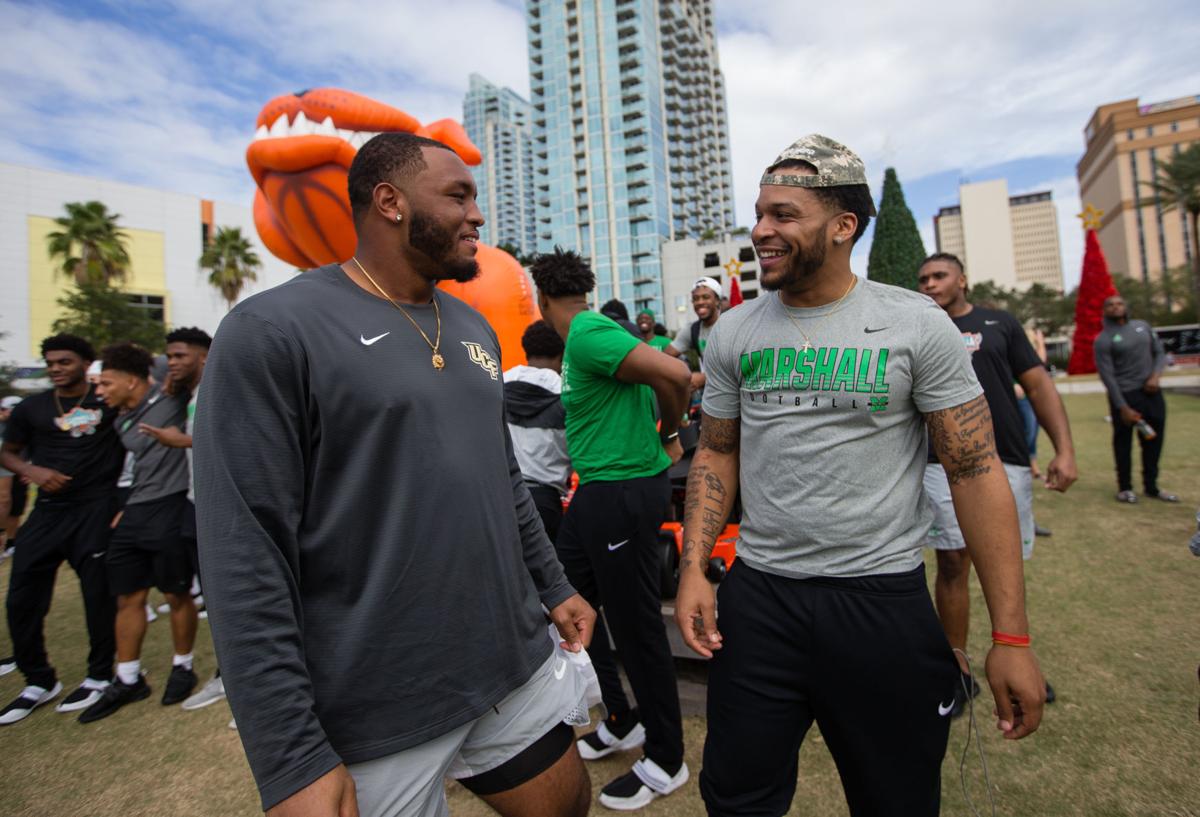 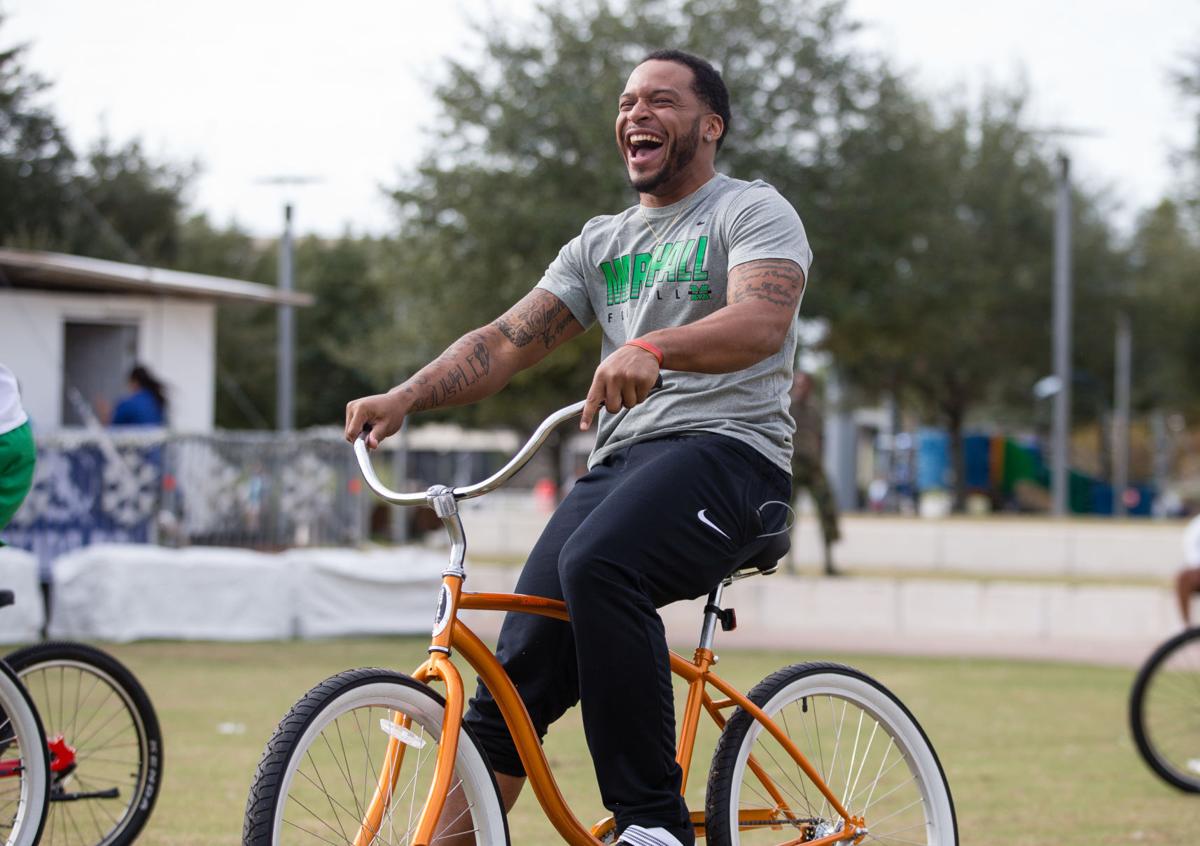 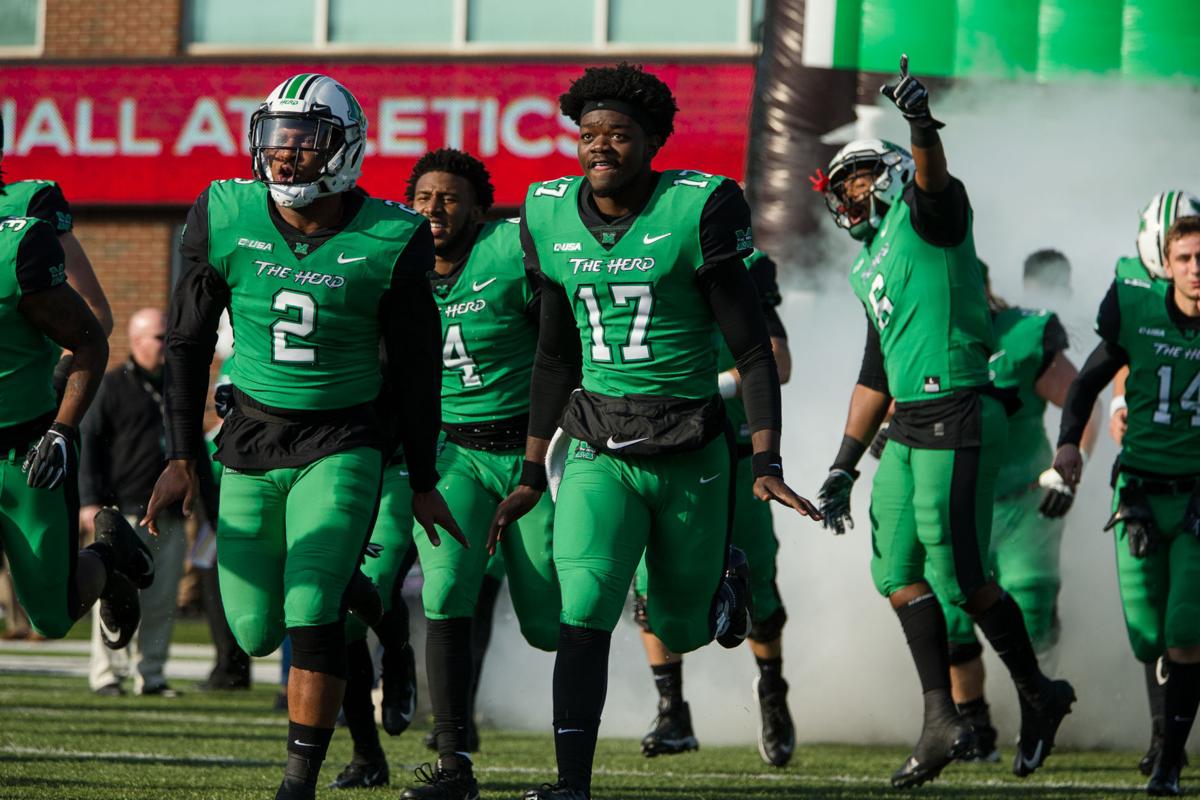 Marshall's Jaquan Yulee (2) and Isaiah Green and the rest of the Thundering Herd take the field for their game against UTSA in 2018 at Joan C. Edwards Stadium in Huntington.

Marshall linebacker Jaquan Yulee sits on the turf at Foreman Field following the start of the Herd’s 2018 contest against Old Dominion in Norfolk, Va. This game was a homecoming for Yulee, who grew up just miles from the venue, while starring at Indian River High School in Chesapeake, Va. Yulee passed away at the age of 24 on Tuesday evening following a car crash in Suffolk, Va.

Marshall's Jaquan Yulee (2) and Isaiah Green and the rest of the Thundering Herd take the field for their game against UTSA in 2018 at Joan C. Edwards Stadium in Huntington.

HUNTINGTON — Marshall University is mourning the loss of a former football player and beloved personality.

Jaquan Yulee, who was with the Herd from 2016-19, passed away in a single-vehicle crash in Suffolk, Virginia, on Tuesday evening. Yulee was 24.

Yulee’s father, Fred, posted about his son’s death in the overnight hours of Wednesday morning.

According to the release, Suffolk emergency personnel received a call at 7:12 p.m. advising of an accident involving a passenger vehicle that had flipped onto its roof.

Upon arriving at the scene, a male driver, the vehicle’s only occupant, was pronounced dead at the scene.

The crash occurred in the 6400 block of Leafwood Road near South Quay Road in rural Suffolk.

Yulee was one of Marshall University’s highest-ranked recruits in history, but his years at Marshall were known for much more than that.

A highly touted linebacker out of Indian River High School, academic issues led the former Alabama commit to Marshall, where he instantly became a fan favorite because of his charisma and personality.

While injuries kept his production on-field for the Herd limited, his impact was not, as evidenced by the outpouring of love and thoughts on social media Tuesday night as word spread of the crash.

Yulee’s teammates — past and present — posted videos of him as tribute while also penning messages in memory of their fallen brother.

Fans and those close to the program also shared the impact of Yulee’s passing.

“This one really hurts,” Marshall fan Stacy Morrison said. “I’m in complete shock. He was one of the nicest people I’ve ever met.”

Trevor Dorsey, a Huntington native who now lives in Virginia Beach, said through text message that the impact is especially felt in Yulee’s hometown and the surrounding Tidewater area, where he was just as beloved as in Huntington.

“Tragic, brother,” Dorsey said. “This community is devastated down here.”

To know Yulee and what he meant to everyone, one must look at his story, which is one of love for football, love for his teammates and a continuous battle to overcome adversity.

As one of the top-rated recruits in Marshall history, much was expected of Yulee, but injuries slowed him early in his career.

Still, the brilliance in his play was seen in spurts that resonated with Marshall fans.

While flashes of brilliance stood out from Yulee on the field, his resolve toward defeating adversity — whether his teammates’ or his own — and maintaining positivity was his legacy.

In December 2017, fellow defensive teammate Larry Aaron was shot and paralyzed during a New Year’s Eve party. Yulee rushed to Aaron’s side in Maryland to be with him in the coming days, doing what he could to help him through the difficulty.

When Aaron passed away from his injuries in February 2018, Yulee wore Aaron’s No. 93 jersey throughout spring practice and fall camp to keep the memory of his fallen teammate with the team.

“We keep his name alive, we keep his jersey around and just keep posting about him and letting his family know that we still love him and that his name will forever live through us,” Yulee said in a February 2019 interview with The Herald-Dispatch.

Later in that 2018 season, Yulee earned a Herdspys Award for Football Play of the Year after his hit on an N.C. State kickoff return caused a fumble that teammate Artis Johnson returned for a Marshall touchdown. The hit went viral, which was typical of Yulee posts.

After a reserve role in 2018, it appeared 2019 was the year Yulee would finally break out in a Marshall uniform as he joined former Indian River teammate Tavante Beckett — a Virginia Tech transfer — as the starting linebackers for the Herd.

In the days leading up to the season opener, Yulee and Beckett raved about Yulee’s first start in a Marshall uniform coming with them again seeing the field as teammates while playing a team from their home state of Virginia — VMI.

Yulee made the most of that starting opportunity, making six tackles — 1.5 for loss — and registering a pass breakup in less than one quarter.

It would be the lone start of his Marshall career as he suffered a broken neck late in the first quarter that ended his playing days with the Herd.

Still, Yulee refused to be anything less than a positive light to his teammates — even surprising them with a return to the practice field Sept. 2, 2019, just two days after the injury.

Undeterred to let the injury be the end of his football story, Yulee went through several neck surgeries to correct the breaks over the next two years in an effort to get back on the field to play the game he loved.

After working so hard for nearly two years to get back, it appeared Yulee’s effort had come to fruition when, on June 29, he put out a social media post proclaiming his return.

“God you never let me down, just keep on blessing me,” the post said. “I’M OFFICIALLY CLEARED TO RETURN BACK TO FOOTBALL…Let’s get this show on the road!!”

In the coming days, Yulee announced he would make his announcement of what school he would attend between three HBCU schools: Virginia State, Central State or Virginia Union.

It was an announcement that never came.

As many pointed out, Yulee’s final social media message will be one that cements the legacy of who he was — both as a person and as a football player. It came just nine hours before his passing.

“It’s not about how big the school is or who went to the school before you,” Yulee’s post read. “… No matter if it’s D1, D2 or D3 when you sign that letter to attend that University, it’s either you gone (sic) eat or you gone starve. (Just) know if you a dawg them scouts coming to get you no matter where you at!”

Marshall University is mourning the loss of a former football player and beloved personality as Jaquan Yulee, who was with the Herd from 2016-…