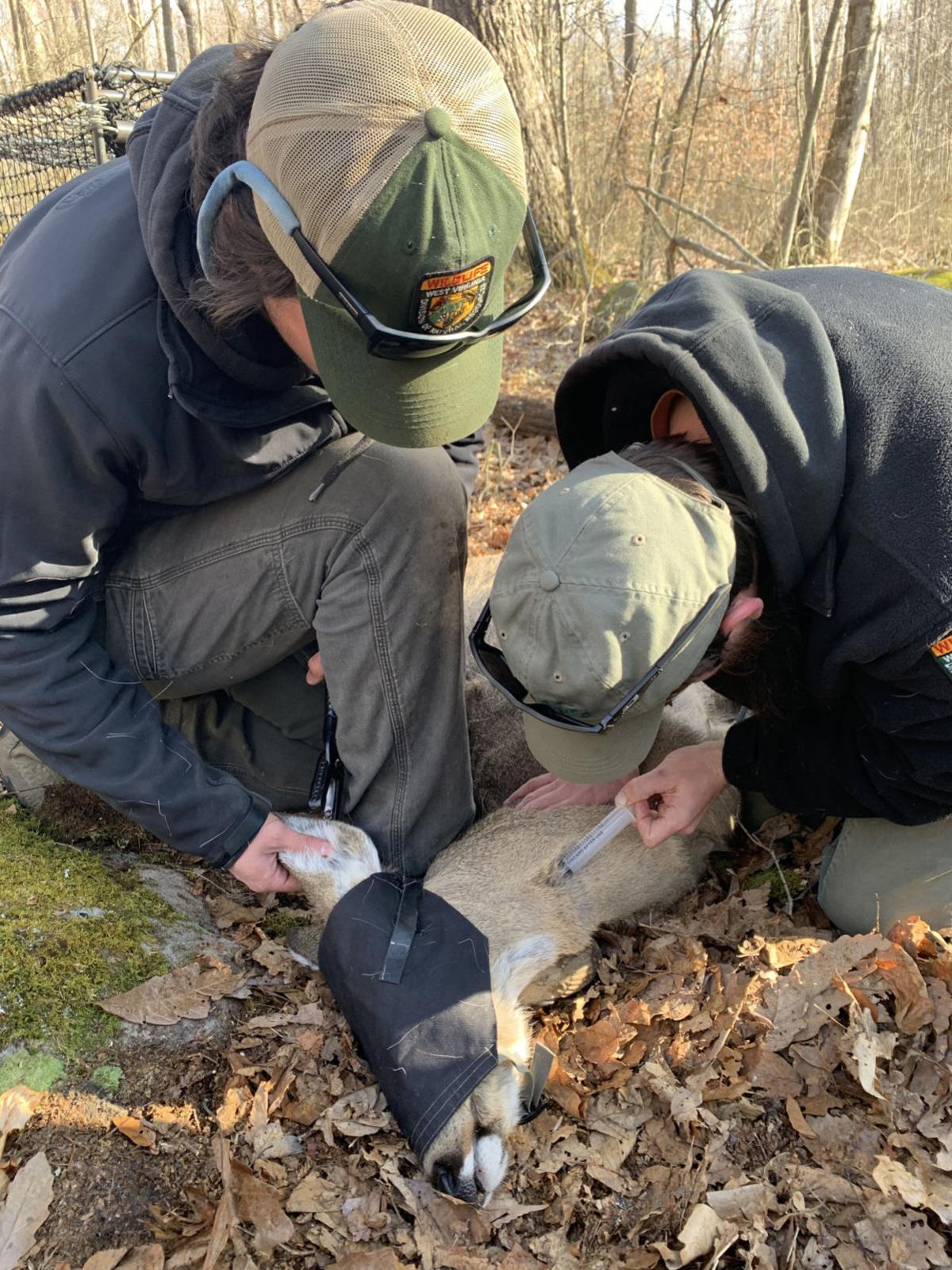 After capturing and tranquilizing a deer, biologists take a blood sample, place tags in the animal’s ears, and outfit it with a GPS-equipped collar that allows them to track its movements. The deer are being collared as part of a multi-year study into mortality and movement patterns. 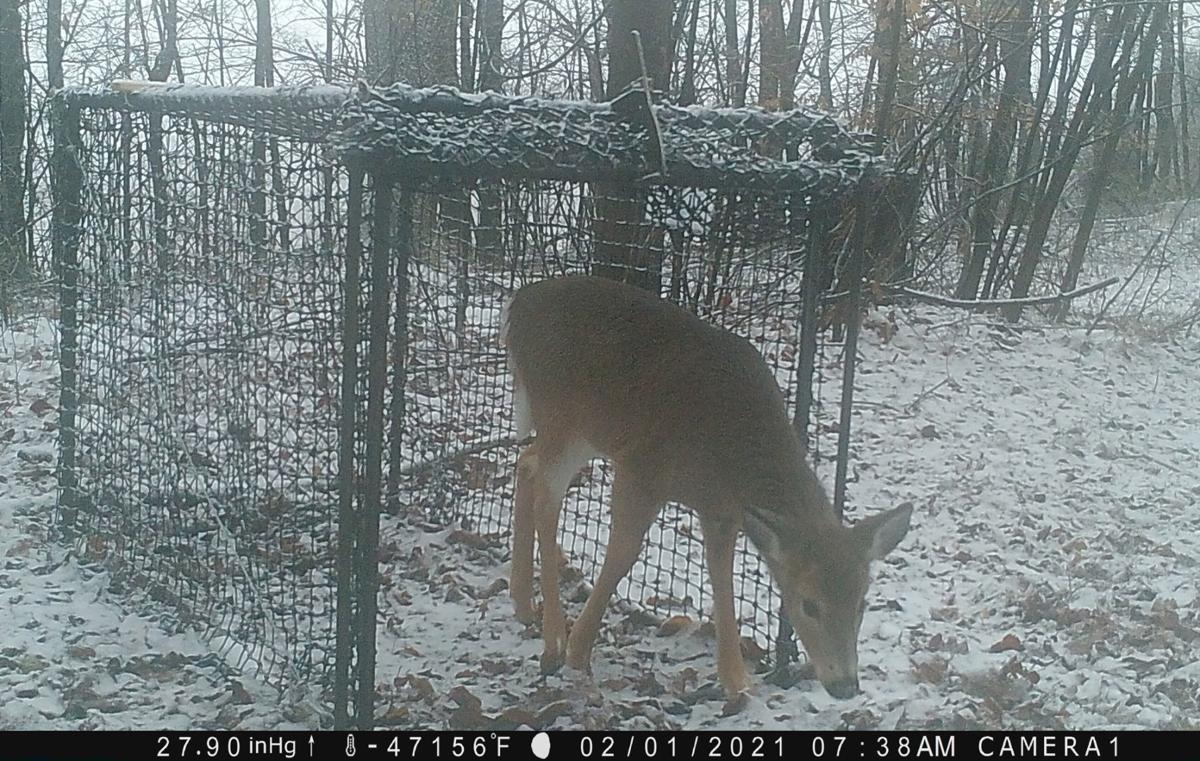 Game cameras give biologists real-time images that tell them when a deer comes to feed at one of the traps. 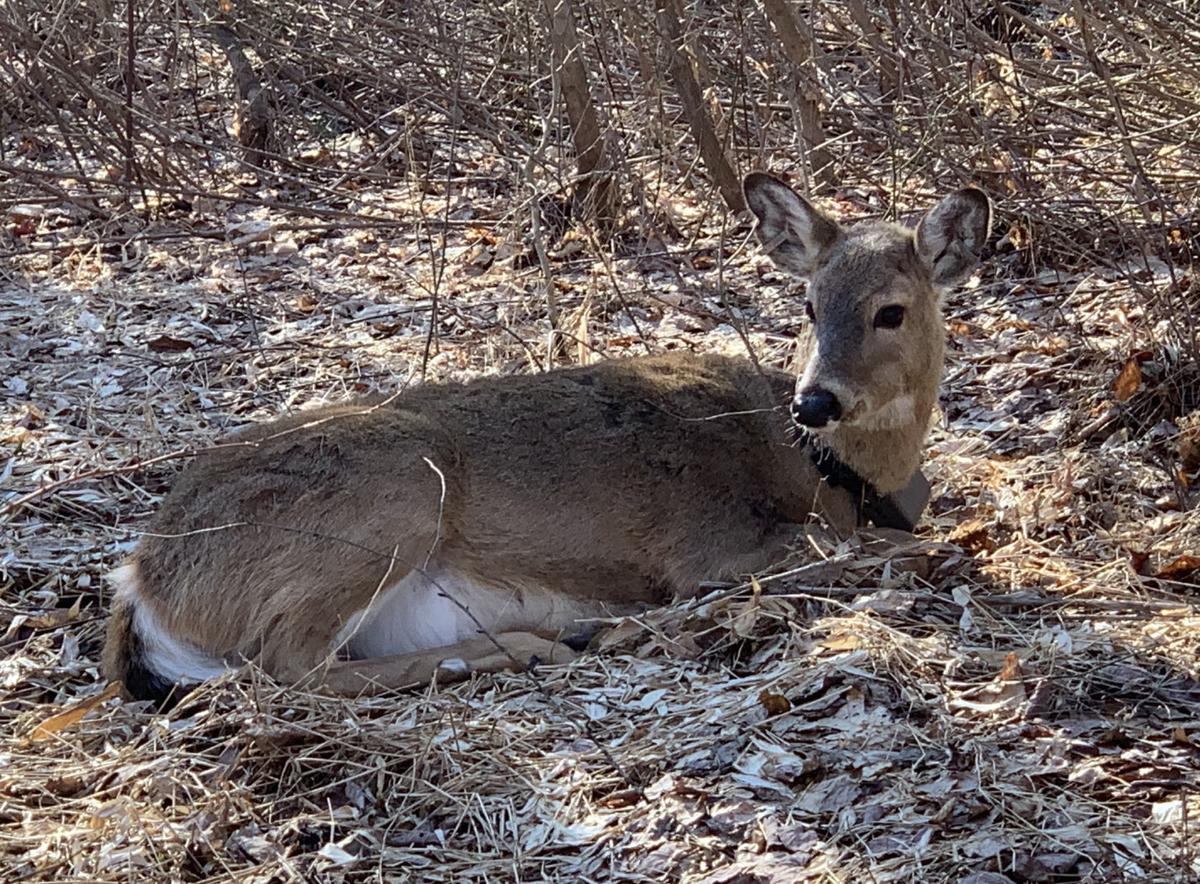 After placing a collar on a deer, workers stand back and wait for the animal to return to consciousness and wander off.

After capturing and tranquilizing a deer, biologists take a blood sample, place tags in the animal’s ears, and outfit it with a GPS-equipped collar that allows them to track its movements. The deer are being collared as part of a multi-year study into mortality and movement patterns.

Game cameras give biologists real-time images that tell them when a deer comes to feed at one of the traps.

After placing a collar on a deer, workers stand back and wait for the animal to return to consciousness and wander off.

During the state’s hunting seasons, they see them in the beds of hunters’ pickup trucks. The rest of the year, they see deer carcasses alongside highways. Sometimes they find whitetails, laid low by injury or disease, in fields or near streams.

Despite all this, biologists don’t really know how long a Mountain State deer survives in the wild. They don’t know, either, how many deer die for whatever reason.

“In West Virginia, we’ve never really done a study,” said Brett Skelly, a biologist for the state Division of Natural Resources. “We have no information on survival rates, and no cause-specific mortality information.”

They don’t have that information yet, but they will. In February, the DNR began a multi-year research project aimed at getting it.

“We’ve put tracking collars on 93 deer — 17 in Hampshire County, 40 in Barbour and Upshur counties, and 36 in Mason and Jackson counties,” Skelly said.

The collars are outfitted with Global Positioning System transmitters that allow biologists to trace a deer’s comings and goings. They’re also equipped with mortality sensors that signal researchers when one of the collar wearers dies.

Skelly, the lead researcher on the project, said the main goal is to find out how deer die.

“We want to find out the percentage of mortality due to hunting versus auto collisions,” he said.

“We also want to take a look at Hampshire County, where a percentage of the deer have chronic wasting disease. We want to know if deer are dying from other causes before they succumb to the disease.”

Skelly said he expects the study to also provide insight as to the animals’ home ranges, their preferred habitats, the movement rates of both male and female whitetails, buck activity during the rut, and how abundance or scarcity of food affects deer.

“While these collars are on, we hope to have a good mast year and a bad mast year,” he added. “That way, we can gauge the effect mast has on some of the other variables.”

There’s a good chance that will happen. The collars are programmed to drop off after three years. Since Skelly and his field crews plan to collar more deer in 2022 and 2023, he’ll have a full six years to get the mast conditions he’s hoping for.

Getting collars on that many deer turned out to be more of a challenge than anyone anticipated. Skelly said he had hoped to begin trapping and collaring whitetails in January, immediately after the Mountaineer Heritage hunting season, but ended up having to delay the effort because the collars hadn’t yet been shipped.

“We started our capture effort about a month late,” he said. “Our first deer went on the air Feb. 19.”

Skelly had hoped his crews would capture 80 to 120 deer by the first of April, when air temperatures would become warm enough to put additional stress on the animals. They ended up with 93 despite the delay.

“We only trapped for about 30 days, and we got that many animals,” Skelly said. “I’m pleased with that.”

Clover traps are web-sided frames, 6 feet long by 3 feet wide by 4 feet high, that work like large box traps. Deer walk into them to eat the bait, and a gate drops down behind them.

Rocket-net traps use rockets to shoot a large net over a large area, trapping deer that have gathered to feed.

Skelly said both methods require plenty of manpower to be effective.

“During the capture phase, we hired on 12 wildlife technicians — four for each of the three areas,” he explained. “And for rocket netting, we brought in additional personnel from our district offices.”

In addition to being fitted with GPS collars, each of the captured deer was also ear-tagged. Skelly said hunters who kill the deer, or people who find them dead, should notify the DNR’s Elkins Operations Center.

“That goes for even after the collar drops,” he added. “If someone finds an ear-tagged deer, we want to know about it.”

He also said hunters shouldn’t be reluctant to shoot a collared whitetail.

“They shouldn’t let the collar influence their decision to harvest the animal,” he continued. “A collared deer is still legal game, as long as it’s taken within the framework of a hunting season.

“One of the main goals of this study is to find out how deer die. We don’t want to get biased survival estimates just because people think the collared animals are protected. We need unbiased information so we can make better management choices in the future.”