A nurse fills a syringe with a dose of the Johnson & Johnson one-dose COVID-19 vaccine on March 31 at the Vaxmobile at the Uniondale Hempstead Senior Center in Uniondale, N.Y. 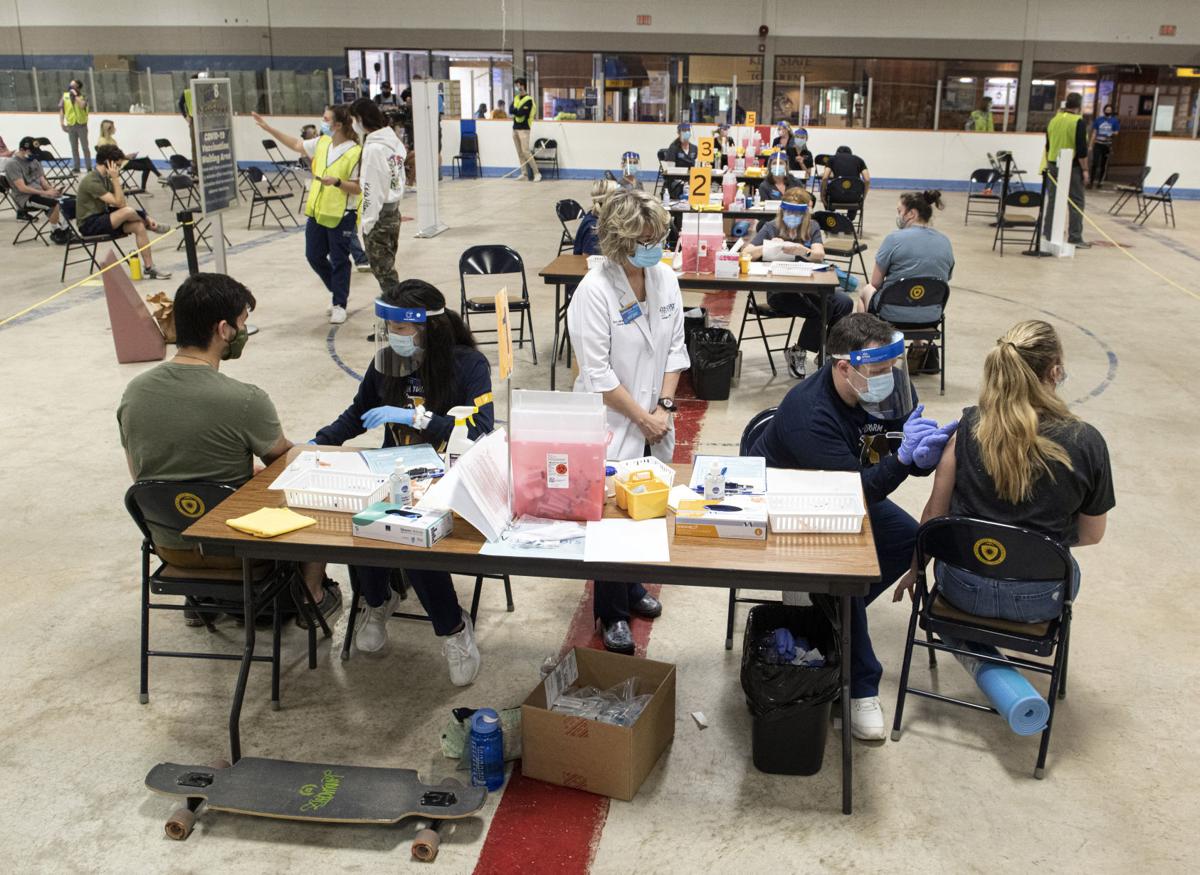 A nurse fills a syringe with a dose of the Johnson & Johnson one-dose COVID-19 vaccine on March 31 at the Vaxmobile at the Uniondale Hempstead Senior Center in Uniondale, N.Y.

West Virginia Gov. Jim Justice said the move was made “out of an abundance of caution.”

The federal Centers for Disease Control and Prevention and the Food and Drug Administration say they’re investigating blood clots in six women in the days after vaccination, in combination with reduced platelet counts that would make the usual treatment for the clots dangerous.

Johnson & Johnson said no clear causal link has been established between its vaccine and the clots.

West Virginia clinics that are scheduled to use the Johnson & Johnson vaccine will substitute with another COVID-19 vaccine manufacturer as supplies allow.

“The safety of West Virginians is always our first and foremost priority,” Justice said Tuesday. “This pause will not impact our ability to continue vaccinating West Virginians, and is exactly the reason why we stood up our Joint Interagency Task Force led by our West Virginia National Guard. They were absolutely ready for this scenario.”

He said the health department received about 400 doses of Johnson & Johnson but had only used 300 of them before Tuesday.

He said the department had planned to give them to high school and college students before the end of the semester, ensuring they were fully vaccinated in one dose before they left campus.

The Cabell-Huntington Health Department has received no local reports of serious adverse side effects from the Johnson & Johnson vaccine, Kilkenny said. The department will also contact local health care providers to give guidance on adverse symptoms.

The Pfizer and Moderna vaccines are still both viable options, he said, and the department will continue to offer those vaccines.

“We think it’s important that people get a vaccine,” Kilkenny said.

A majority of young adults in Cabell County are still not vaccinated, he added.

Kentucky Gov. Andy Beshear on Tuesday also urged Kentuckians to follow through on appointments for the Pfizer and Moderna shots.

“We’re going to work through this,” the Democratic governor said at a news conference. “I think it’s going to be deemed safe and effective. But we’re going to pause until everybody knows how to treat … what appear to be very rare complications.”

Kentucky has received about 210,000 doses of J&J vaccine, Beshear said. He didn’t have a specific number of how many doses had been administered, but he estimated J&J vaccines accounted for less than 5% of overall COVID-19 shots in Kentucky.

Like many states, Kentucky has used J&J shots for more vulnerable and hard-to-reach populations. Inmates at jails and prisons have been among the Kentuckians to receive the single-dose shots.

On Monday, Beshear pledged to lift capacity restrictions at most businesses and venues once 2.5 million Kentuckians have received at least their first COVID-19 shot. Meeting the “vaccination challenge” also would result in removing physical distancing restrictions as well as curfew restrictions on bars and restaurants.

Beshear estimated Monday that about 1.6 million Kentuckians had received at least their first dose of a COVID-19 vaccine. Anyone 16 or older is eligible to be vaccinated in Kentucky.

The majority of vaccines administered in the U.S. have been from Pfizer and Moderna.

Millions of doses of the J&J vaccine have been given across the country, the vast majority with no or mild side effects. Ohio has been using the single-dose shot for vaccination clinics on college campuses and to expand vaccine availability in other areas.

The West Virginia Department of Health and Human Resources, through the federal Vaccine Adverse Event Reporting System (VAERS), has not received any reports of blood-clotting events in West Virginia residents who have received the Johnson & Johnson vaccine, but will continue to monitor for instances going forward.

Cincinnati-based Kroger Co. halted administering the J&J vaccine at pharmacies and clinics in its supermarkets. Patients who were scheduled to receive that vaccine will instead get the Pfizer or Moderna two-dose vaccination if those are available, and if not, Kroger will work to reschedule those vaccination appointments, spokesperson Kristal Howard said.

The state was mainly directing the single-dose J&J vaccine to mass vaccination clinics and to its 63 public and private four-year colleges and universities, most of which have already completed their student vaccinations, DeWine said during a briefing Tuesday.

But Ohio still has a ways to go and the pause dealt a major setback to the state’s plan to vaccinate students before they head out for summer break in a few weeks.

Statewide, more than 260,000 doses of the J&J vaccine have been administered, making it just 0.06% of the number of vaccines the state has disseminated through providers and mass vaccination sites.

As of Tuesday, more than 4 million Ohioans, close to 36% of the population, had received at least one dose of a coronavirus vaccine.

During DeWine’s briefing, a handful of state medical officials attempted to appease public concern over the vaccine news by highlighting the small number of adverse cases and the transparency around the issue.

“The bottom line is that these cases appear to be extremely rare,” Dr. Bruce Vanderhoff, the state’s chief medical officer, said. “And the fact that the CDC and the FDA have raised concerns and pushed the pause button on the basis of these six cases should give Ohioans great confidence in not only the priority that is being placed on vaccine safety but also the reliability and transparency of the CDC and FDA’s safety monitoring systems.”

Officials at Cleveland State, Bowling Green State, Youngstown State and Miami University announced they were pausing their student vaccination center as a precaution, while Kent State postponed its J&J clinics until further notice. Other state universities and colleges will switch to providing either Pfizer or Moderna doses.

In Toledo, where health providers are racing to vaccinate more people as cases surge in neighboring Michigan, the J&J pause will hinder efforts to get vaccines out faster, said Eric Zgodzinski, health commissioner for Lucas County.

Providers who began using the J&J vaccine last week in a coordinated campaign to reach those who are homebound have put those efforts on hold and now must figure out how to go forward, he said.

“It throws a monkey wrench into our planning,” he said.

A mass clinic quickly pivoted Tuesday from J&J to doses of Moderna without turning anyone away.

“We do have vaccine available for everybody who wants it this week and in the coming weeks,” Zgodzinski said.