Get Started
You are the owner of this article.
Edit Article Add New Article
You have permission to edit this article.
Edit
Welcome, Guest
Home
e-Edition
News
Sports
Opinion
Features
Obituaries
Weather
Share This
1 of 5 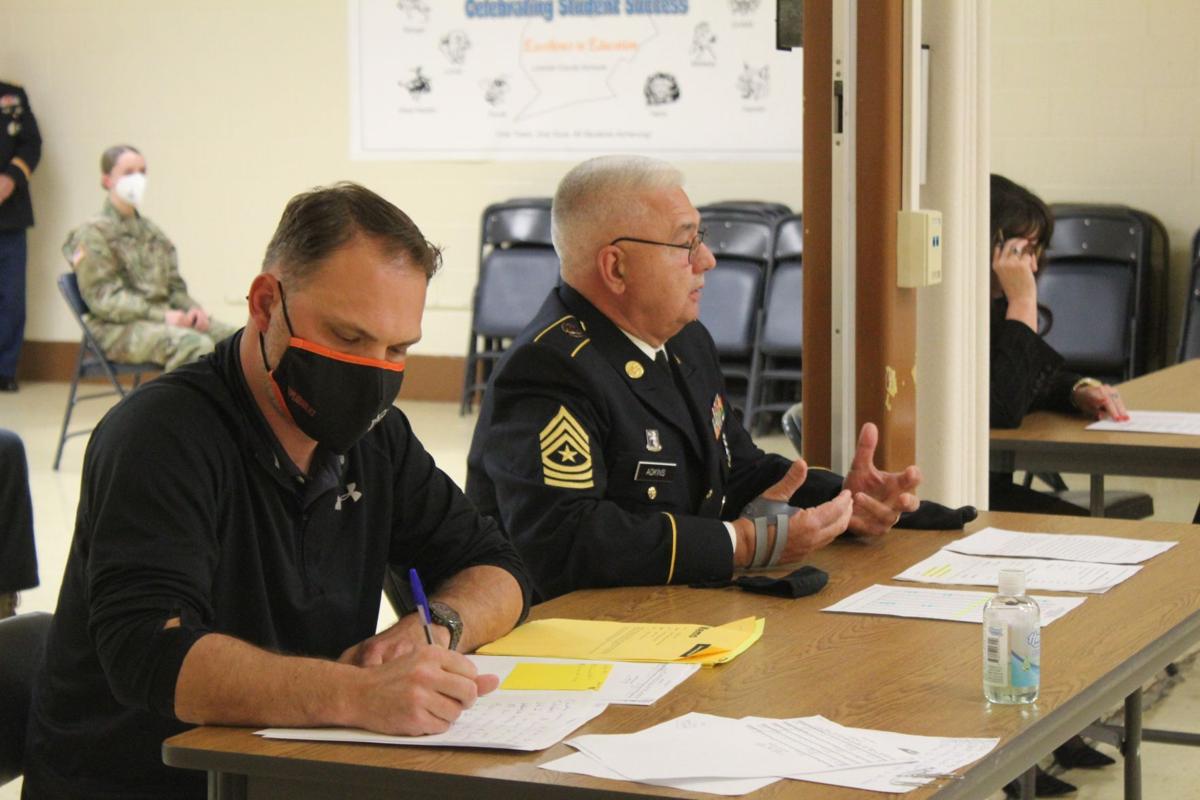 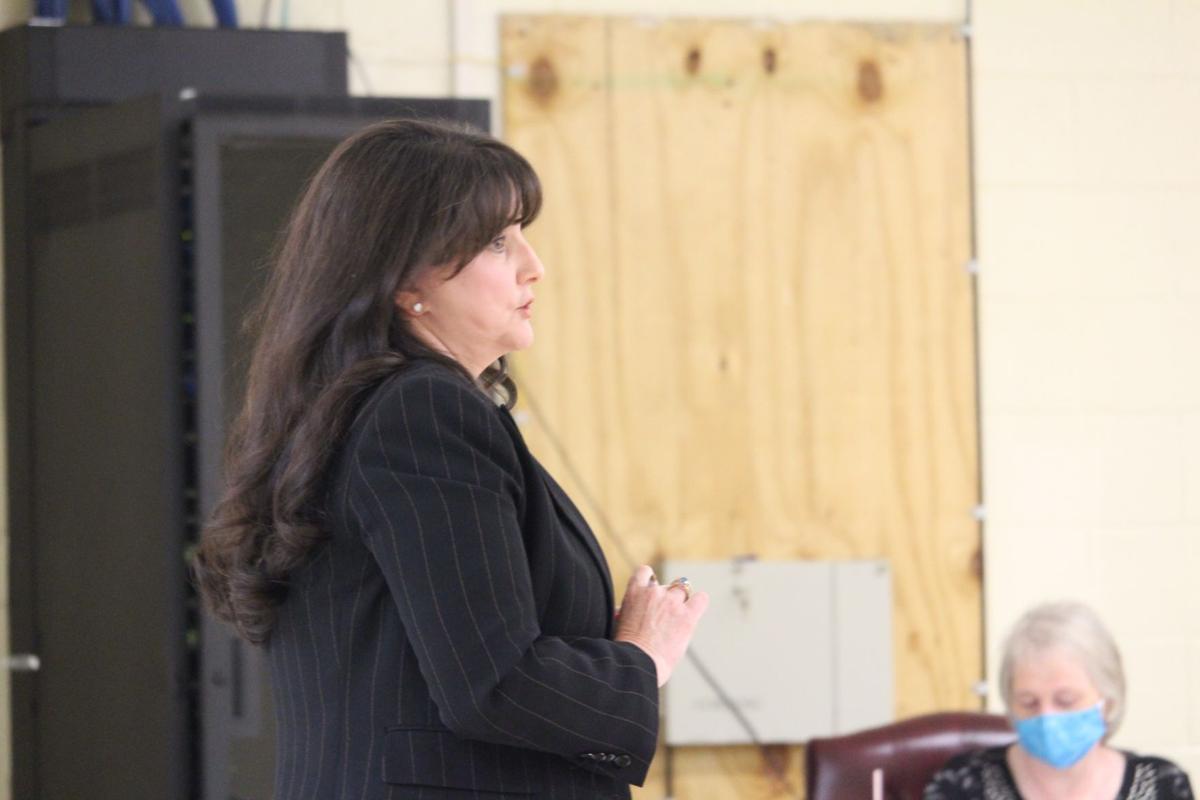 The administration was represented by Leslie Tyree, an attorney from Mountain State Educational Services Cooperative, during the two hearings Thursday, April 22. 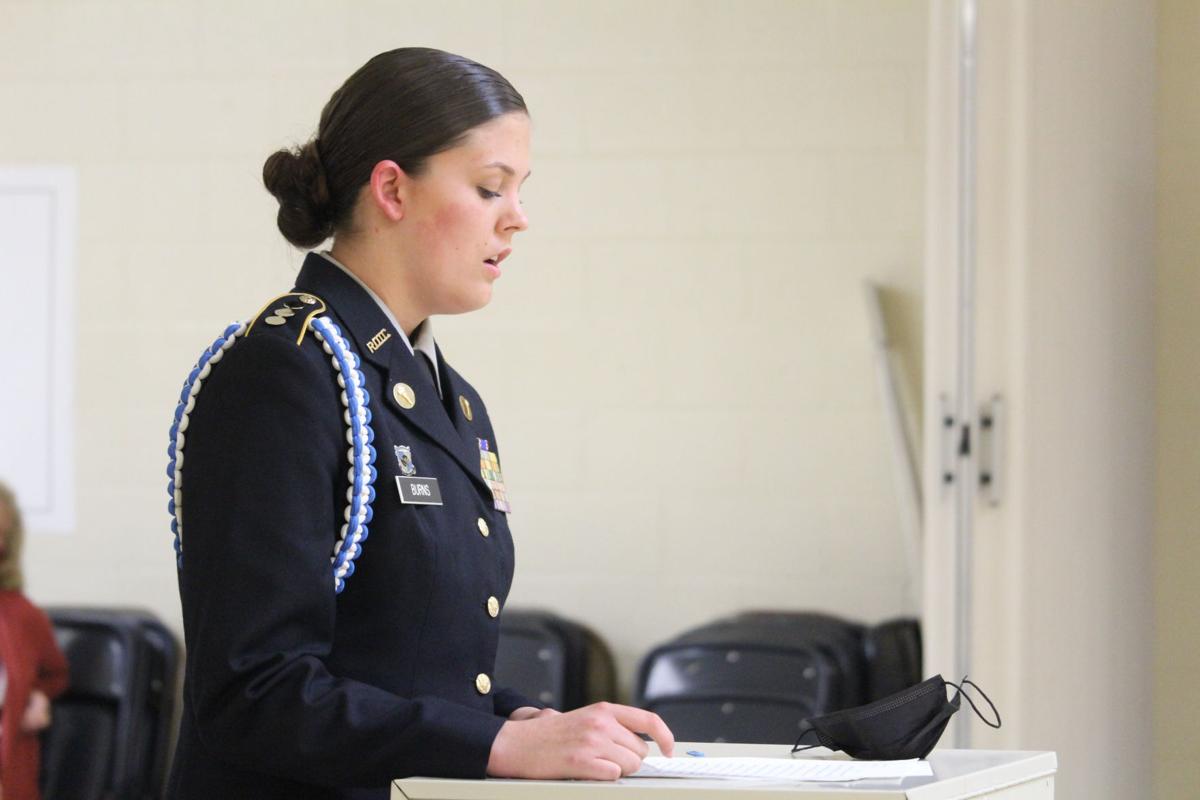 Tianna Burns, a junior currently in the program at LCHS, came to the hearing April 22 wearing her Dress Blues uniform. 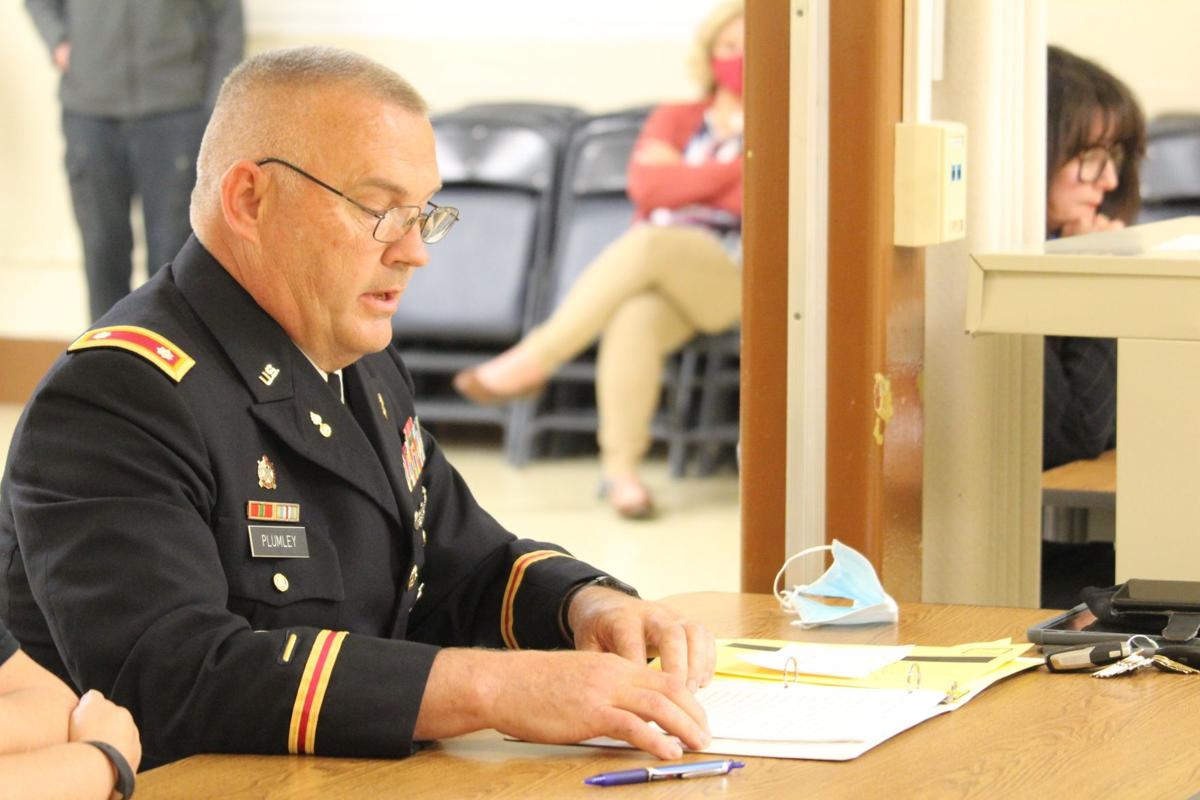 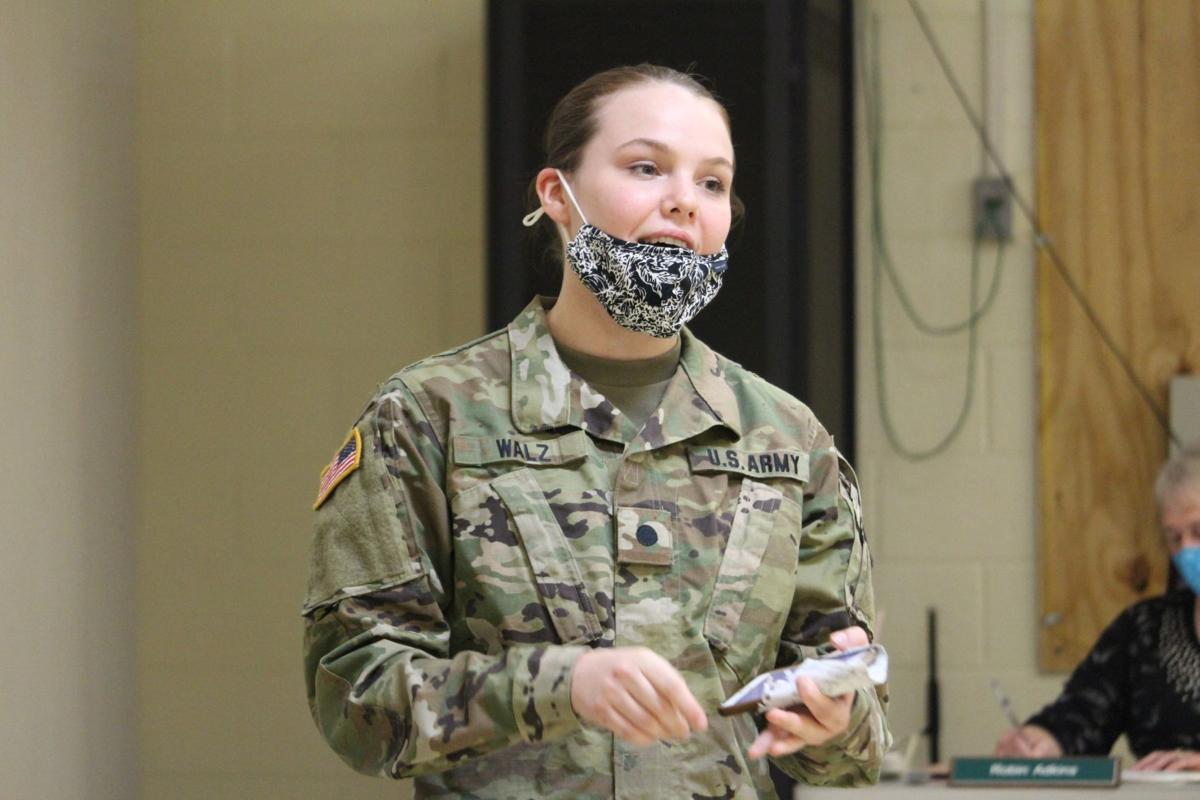 Hannah Walz, a 2020 LCHS graduate who is currently on a full-ride to Marshall and in their ROTC program, testifies during the hearing April 22.

The administration was represented by Leslie Tyree, an attorney from Mountain State Educational Services Cooperative, during the two hearings Thursday, April 22.

Tianna Burns, a junior currently in the program at LCHS, came to the hearing April 22 wearing her Dress Blues uniform.

Hannah Walz, a 2020 LCHS graduate who is currently on a full-ride to Marshall and in their ROTC program, testifies during the hearing April 22.

Parents came out April 20 to voice concerns over the possible elimination of the program at the regularly scheduled board meeting. Both instructors also requested hearings to present their case to the school board, which took place April 22. Both hearings were open to the public as they did not request an executive session. However, COVID-19 guidelines for capacity inside the room remained in place for the meetings.

The elimination of the two teaching positions for the program at Lincoln County High School, which would also in effect close the program, is among approximately 37 positions up for elimination on Tuesday’s agenda. These cuts are being recommended by Superintendent Jeff Kelley and his administration as they anticipate a major loss in funding for the upcoming school year.

Assistant Superintendent Josh Brumfield said the system has seen a drop in about 200 students, and under the state funding model that would lead to approximately $1 million in funding lost.

“And that’s, 200 students is a lot of money,” said board member Rodney Baker.

The administration was represented by Leslie Tyree, an attorney from Mountain State Educational Services Cooperative, during the two hearings Thursday. She said the rift and transfer process is always a difficult one for administrations each spring.

Tyree said JROTC is being looked at because of the cost-benefit analysis. She said when looking at the enrollment numbers for the program, it’s been determined that not enough students are benefitting to justify the cost to the county.

However, Brandon Tinney, Staff Representative from AFT-West Virginia, said the administration is overlooking the amount of money the United States Army puts into the program when considering it for elimination during his testimony on behalf of Sgt. Maj. Craig Adkins.

“What you have with the JROTC program you don’t have with any other program, is you have a ‘buy one get one free,’” Tinney said. “Basically the Army pays for half the salary. And so you have two instructors, and basically get both instructors for the price of one.”

Lt. Col. Dallas Plumley said when he was informed about the recommendation to close the program in March and was told he could request a hearing, he was initially hesitant.

“In March I was informed that JROTC was recommended to be closed by Mr. Kelley, and the board members would have the final say,” Plumley said. “At first I thought maybe the program has done all it can for the community to help kids be successful. As part of that meeting I was informed about this hearing to discuss this with the board, and I initially felt it would be a waste of time. After I thought about it for a while, I decided that JROTC is a student and community program, and the community and students should have the opportunity to share their thoughts with the elected board members.”

Plumley said an online petition was started in support of the program last month, and after only 12 hours over 325 people in the community had already shared their experiences with the positive impact the program has had on them.

“At this point I decided that JROTC is something that the community wants and needs, and is not something that can be just thrown away during a financial review by the new superintendent who doesn’t understand the positive impact the program has for the community and the future of our students,” Plumley said.

Adkins also said it’s important to note that if the program is eliminated at this time, it is unlikely it could ever be brought back to Lincoln County.

“It isn’t about me,” Adkins said. “It’s about saving a program that if you guys let go, you’ll never get it back. And I don’t think you quite understand that. There are 1,700 schools on a waiting list waiting to get on to the Junior ROTC program. You shut this one down, they’ll just take that $109,000 and shift it over to open a new program somewhere else. It’s not coming back guys.”

Adkins again reiterated it’s not about him or Plumley, but the impact it would have on students and the community if the program is cut.

Tianna Burns, a junior currently in the program at LCHS, came to the hearing wearing her Dress Blues uniform. She said even the discipline of learning the proper placement of items on this uniform has taught her other lessons as well.

“It’s taught me that small things make a difference,” Burns said. “And the way that I present myself makes a huge difference.”

Burns also said she feels the elimination of the program would be a huge loss for the community.

“I truly believe if Lincoln County loses this program, it will be devastating to our students,” Burns said. “I know it will be to me.”

Hannah Walz, a 2020 LCHS graduate who is currently on a full-ride to Marshall and in their ROTC program, said this program was empowering for her and was instrumental in preparing her for life after high school.

“As a woman, this program is absolutely empowering,” Walz said. “I had no confidence whenever I came into high school. I couldn’t speak in front of a crowd. If I was looking at myself right now, standing in front of you all, I don’t know what I would be thinking about myself. But I would be absolutely proud because this program has done so much for me and made me into the leader that I am today, and the leader that I’m going to be in the future.”

School Board President Steve Priestley said the board will carefully consider both sides before Tuesday’s vote.

“Please understand the way this process works,” Priestley said. “The administration has analyzed data, they have discussed it with department heads, principals and made decisions that they thought they should recommend to us. We as board members are hearing things for the first time today.”

The Lincoln County Board of Education is expected to meet at 1 p.m. April 27, and a vote on the upcoming personnel schedule is on the agenda. This includes the vote on the JROTC instructors’ positions.